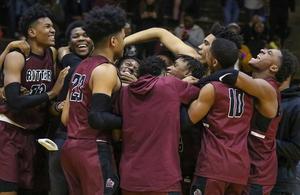 The No. 2 small school in the STLhighschoolsports.com rankings, Ritter (23-6) advanced to play either Blair Oaks (27-2) in a semifinal at 8:15 p.m. Friday at JQH Arena in Springfield.

WELLSTON — Luther Burden burst from the crowd for a breakaway.

A sophomore guard for the Cardinal Ritter basketball team, Burden got to the rim but was met by an O’Fallon Christian defender. His reverse layup didn’t fall but he wasn’t sweating it.

Brandon Ellington was right behind him.

A 6-foot-7 jumping jack, Ellington grabbed the ball off the rim and slammed it home as Ritter punched its ticket to the state semifinals with a 67-54 win over Christian in a Class 3 quarterfinal Saturday at historic Viking Hall on the campus of Normandy High.

It’s the ninth state semifinal appearance for Ritter and its first since 2014, when it won its seventh state championship.

The No. 6 small school, Christian (25-6) did what it could to make Ritter sweat. The Eagles were undersized against Ellington and senior forward Garry Clark (6-foot-7) but they were not outgunned.

Junior guard Roddy Alexander spent the afternoon scoring one tough bucket after another. He knocked down pull-up jumpers and attacked the basket. He finished with a game-high 23 points. Junior forward Kalin Black was big-time, too. He scored 17 points, grabbed seven rebounds and blocked two shots.

The Lions thought their defense was solid, the Eagles just made shots.

“They were hitting contested shots. We’ll live with that all day,” Burden said. “They made some tough shots. There’s no better defense you can do that.”

Ellington was a one-man wrecking crew in the paint on the defensive end. He blocked 11 shots and contested several more. The Eagles didn’t learn their lesson until late in the contest and that was just fine by Ellington.

“It’s my rim so if you keep coming at my rim I’m going to keep sending it back,” Ellington said with a smile. “I don’t mind adding them up on the stat sheet.”

On the offensive end, Ellington matched his season-high with 20 points. He’d have easily bested it had he not gone 4-of-12 at the free-throw line. He said it’s a focal point of his going forward.

“I just have to fight through it,” Ellington said. “You have to find a way to dig yourself out of it.”

The Lions started to distance themselves from the Eagles in the third quarter and held a 48-37 lead to start the fourth. Christian got a 3-pointer from Alexander and then a pair of free throws from Black to trim it to 48-42 with 7 minutes and 3 seconds to play.

Ritter went for the jugular. Over the next 65 seconds, the Lions scored six unanswered points highlighted by Ellington swooping in and cramming home the tip-in dunk.

Johnson immediately called timeout as the Ritter bench and fans roared with the momentum of the moment.

“You get a putback dunk and a timeout you get to turn up with the bench,” Ellington said. “That’s a really good feeling. You get the whole team hype and get the crowd into it. It’s like the best feeling in the world.”

Johnson called timeout because he wanted his team to enjoy that play but also get their heads together. It was time to salt away the trip to state.

“I felt like right before they were a little winded,” Johnson said. “When he tip dunked it in, I thought we needed that refocus moment to get back to doing what we do. That’s what we did.”

Christian never cut the deficit to single digits the rest of the afternoon.

Burden finished with 16 points, three rebounds and three assists. Clark was a machine as he scored 15 points and hauled in 14 rebounds. He also had three assists.

Senior guard Glenn Valentine had just three points but was a maestro as he handed out seven assists.

Christian got a boost from the return of sophomore guard Kristian Davis, who had been out with an injury for nearly a month. His return brought a spark to the Eagles in the first half but the Lions were too big and too much for the young Eagles who count just one seniors on the roster.

“I’m proud of him. He’s been out the past month, the last nine or 10 games,” Christian coach Adam Glenville said. “For the younger guys that are coming up, it’s a good feeling. They need to use this to get better.”

Ritter was in a similar position last season. With just one senior, the young Lions were knocked out in the district championship game by eventual champion Vashon. A year later, they’re back and on the cusp of snagging a small piece of immortality. Banners hang forever and Ritter is chasing its eighth.

“Going (to state) as a player and a coach before, I tell my kids time and time again if you go it changes your life,” Johnson said. “It motivates you for the rest of your life. You want to be a champion. It’s exciting for them. I want it for them.”