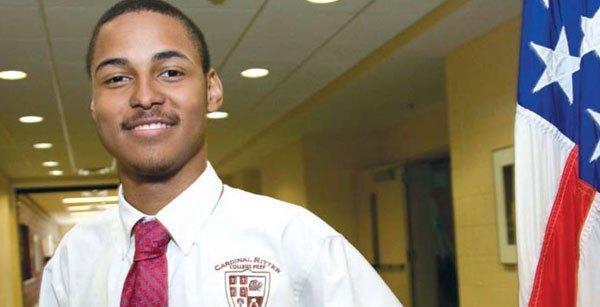 Dear Students & Parents, Cardinal Ritter College Prep has implemented a one-to-one technology program. One-to-one simply means that students will have their own technological device to use in class and at home.

Samsung Chromebook specs include but are not limited to:
❖ 6.5 hours of battery life
❖ Webcam
❖ Wireless internet
❖ Bluetooth compatible
❖ USB 2.0 & 3.0 Port, HDMI Port
❖ Weight is only 2.4 pounds, height is 1 inch when closed

It is our intention that students use their Chromebook to access textbooks, record lecture notes, conduct online research, and send assignments electronically to their teachers. The Chromebook will also allow students to create documents, spreadsheets, produce PowerPoint presentations, edit pictures, and access to a wide variety of Google education Apps.

This exciting new program allows Cardinal Ritter College Prep students the opportunity to improve their technological IQ and enhance their learning experience. Attached is some additional information regarding the Google Chromebook.

Not long ago, we would utter the word “Chromebook” in the presence of a not-so-tech-savvy consumer and get looked at like we’re speaking in Klingon. Not anymore. Chromebooks dominated 2014, doubling their shipments and becoming nearly ubiquitous in schools and universities. Sales of Chromebooks reached 5.2 million units worldwide in 2014, with more than 80% of the demand in the U.S., which was an 80% increase in sales from 2013.
It is now reasonable to imagine that a Chromebook can be used as a primary computer. In addition, if you don’t believe me, just look at the numbers. They have appeared on Amazon’s bestseller list since 2013 and Gartner predicts that Chromebooks will be shipping at a rate of 15 million in 2017. They might not be a powerhouse, or eye-catching, but they will tackle basic Internet tasks like the best of them.

Chromebook is a different breed of computer. It runs on Google’s web-based Chrome OS, which is designed to be used with an Internet connection. Most of Chromebook’s documents and apps exist in the cloud. Moreover, Google automatically provides 20 GB of cloud storage for every Chromebook. This guide will rundown Chromebook basics and speculates if a Chromebook could be your next primary computer.

Chromebook 101 You can think of a Chromebook as an Internet-dependent laptop that starts up super-fast (roughly 7 seconds, or a fraction of the time it takes to boot an older model Windows-based computer). When you turn on the Chromebook, you will notice the only native app is the Google Chrome Internet browser. In addition, that is pretty much your key to all that is Chromebook. Everything else is composed of Web apps (email, photos, documents), or apps that run while you are connected to a network. Google also throws in 20 GB of cloud storage for every Chromebook.

The obvious benefits of everything being saved on the Web are that you will have access to it from any computer. Plus, if your Chromebook ever bites the dust, you won’t have to worry about losing all your apps, documents, and settings.

Chromebook Offline Most Chromebooks can connect to the Internet with both Wi-Fi and 3G, but there are times when you simply can’t find a Wi-Fi signal. Fortunately, there are workarounds for plenty of routine tasks. You can still compose and read emails with Gmail Offline and word process with Google Drive Offline. The offline apps will automatically sync and save when your computer has an Internet connection. Listed below are the tasks that Chrome OS can manage without Internet connection:

Battery Life: Chromebooks have long battery life. It’s not uncommon to find a Chromebook that can last all day on one charge. However, the very best Windows notebooks can last longer.

The best budget laptops Maybe you noticed that Chrome dominated the budget laptop scene in 2014. Sure, there are several similarly priced Windows laptops that are equally stellar for the buck, but Chromebooks are the best way to utilize productivity suites online for under $350.

The bottom line Chromebooks are an excellent choice for anyone seeking a portable inexpensive computer for browsing the web. If you are a heavy Google user and fit this description, a Chromebook would be perfect for you.